The last two days have not been really productive. I have sum-up the staggering amount of 31 pages, Monday was particularly troublesome, with just 1 page of progress.

I started today 503 pages behind schedule, including today’s quota of 178 pages. The only thing that’s still right on schedule is this week’s book, just reading 30 pages per day, I’ll finish with it by Sunday

What’s life without a bit of a challenge, hopefully today my total will be more than 30. I predict an intense weekend filled with caffeine and late nights.

With little under 6 hours to close-out the eight week of reading in the fourteen year of this project, I don’t want to snap the momentum of the last three week of getting pass the weekly reading goal.

I wanted to also finish the first book of the Prequel trilogy of the massive science fiction classic Dune, The Butlerian Jihad, since today was the last to finish the previous book, Exhalación by Ted Chiang, and tomorrow the starting date of the Dune book, the 52 books in 52 weeks challenge is perfectly cover, basically I am one week ahead schedule in that regard.

To help me along this first leg, I’ll continue with issues three and four of the really trippy Dark Knights: Death Metal, let’s see what Mr. Snyder has in store for us.

To that, I’ll add as much as I can from The Butlerian Jihad, the dream would be to finish it today, but 204 pages in 5 hours is quite the challenge.

This has been a very hectic day, and although I had a good reading session over my morning coffee, the numbers are not quite there.

With a few hours left on this Saturday this is how things are, on Dune: The Butlerian Jihad, I’m near at the halfway point , on page 280 of 619, and with the intention of finishing tomorrow, there’s a lot of ground to cover.

On the total of the week, there’s still 472 pages ahead of me, with a pretty decent pile of graphic novels to read this number can go down pretty fast.

It’s time to chip away on the book to try and be close to 200 pages left for tomorrow.

As I enter the weekend, my reading can be only describe as underwhelming.

Considering that thanks to the other weeks amazing reading there’s almost a week of cushion to keep the 52 books in 52 weeks project in time, there’s still not a red flag, but for my vision and comfort, this book should be done my Sunday night.

Today I’ll close out as strong as I can, probably leave around 200 pages for each of the weekend days, and in between squeeze some of the new graphic novels from this week’s loot.

Let’s see how this day closes out.

I read the original novel around 2006, and although I loved it, as well all of its incarnations in the silver screen, the time was not right for me to jump into what us considered the Science Fiction counterpart of Lord of the Rings.

Well that time has arrived, and I have the full intention of going thru every single piece of story I can get my hands on .

For this particular endeavor my decision was to go chronologically, and with the help of a very handy list provided by the official website of the series, dune novels.

As you can see in the picture above, my journey starts some 10,000 years before the original novel with the short story Hunting Harkonnens, in my case is contained in The Road to Dune, and the novel Butlerian Jihad, both written by the dynamic duo of Brian Herbert and Kevin J. Anderson. 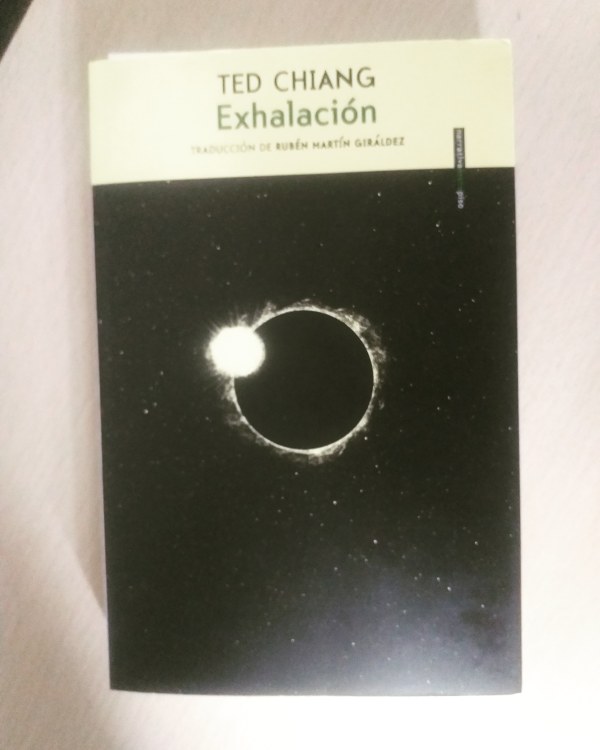 I was supposed to start reading the latest collection of stories by the brilliant Ted Chiang today, but as my reading has caught quite the rythm, I jumped right into the next task.

Needless to say this amazing collection just flow through my hands like water, and all the hype around it is, in my humble opinion, not even close what these beautiful stories are.

My first contact with a story by the highly awarded writer was thru the movie The Arrival, which consequently thus not appear in this particular collection, I was so intrigued by the use of time as one of the characters in the story that I had to read more.

I was not disappointed, and in a way the fact that Mr. Chiang has written so few stories is even more endearing, it makes them precious little rare jewels that shine brightly.

My personal favorite story was the Exhalación, which also give its name to the collection, the self awareness of fragility and hopefulness is not only for human beings, and that tough fills me with hope for the future.

To finish this book is even sweeter because thanks to it I just crossed the 10,000-page mark, and with a whole week of extra time for the next book, this year is only just started.

So what’s next for my reading?

I have just finish what was the perfect finale of such an amazing series.

With The Ashes of Worlds, all the tension and conflicts building thru-out six books come crashing down, being honest, and not quite sure in how being one of the shortest books in the series, 512 pages, Mr. Anderson handles all the lose ends beautifully, without feeling the conclusion is rush or for sake of closing out the story.

My favorite parts of the series are the ones involving the idea of the keepers of the memory or history of the various civilizations, the name of the series comes from the grand epic of the Ildiran Empire named Saga of the Seven Suns, were the Rememberers, the equivalent of the human historian, pour all the great deeds of their vast history for all the population to learn, this is kind very similar to the Poetic Edda of the Norse Mythology, full of figures that time have transform into long lost memories.

It’s only fitting that the series finish with the creation of a new record of an ancient civilization’s story, I will not spoil anything further that that, you should really give read this amazing story.

The thing that I think reverberates the most is that inside the keeping and telling of this stories there’s the ever present phantom of the “fabricated reality”, all thru-out the books, and from all the civilizations involved, there’s some time of manipulation of information to create animosity against what is perceive as foreign or different, something that affects our world so deeply, and even in the face of imminent destruction, they can’t put their differences behind and fight the common threat.

That is what makes this type of stories feel so real and hopefully more of us can learn that there are more things that binds us as sentient creatures, and that being a green priest from Theroc, or a Roamer from Kanaka is merely circumstantial.

I highly recommend any work from Kevin J. Anderson, but this saga in particular will hold a special place in my heart, those types of books that eventually you come back to them or share with your grandchildren.

Now I am off to read my next book, Exhalación by the master of Science Fiction Ted Chiang.

Last night I finished reading a very interesting volume of the Justice League written by Robert Venditti, anything involving the Spectre or any other oddball character like Detective Chimp, is a must read for me.

This 224 pages put me over, by a measly 14 pages, of my worst year of reading, which was year number four and the total for the entire year was 8,730 pages.

This is always something I have really present, each new year at least has to surpass than really slow year. The next goal is to have a better total than last year, lets go get those 16,290 pages.

This year of reading is moving at lighting speeds, fortunately, I have been hitting all my weekly goal like clockwork. This has made me come to the realization that my Science Fiction TBR pile will not be enough to read the 52 books in 52 weeks.

So I come here in search of some suggestions, given that Sci-Fi is not a genre that I’m that familiar with. My list right now has 26 total books, 6 that are on the read pile, 1 that is what I’m currently reading, and 19 that were already on my shelves or my digital library on my Kindle.

The list is as follows, the books in read letter are the one I have already read, the one with yellow is what I’m currently reading, and the rest is what is coming up next, in that particular.

There it is, I know that my reading material can last me until December, but the anxious part of me sees that only half the required material is available, so it kicks into overdrive.

Any suggestion is greatly appreciated, you can leave it the comments.

As I start the last book of this fantastic saga, Ashes of Worlds, one question pops immediately into my mind, on in the hell is everything going to close-out in 512 pages?

The last book finished with some twists, seriously how did I took so long to jump into this amazing universe created by the extremely talented Kevin J. Anderson. After this book comes an compilation of short stories by multi award-winning author Ted Chiang.

Then, I’ll come back to Mr. Anderson, and is collaboration with Brian Herbert, continuing the monumental legacy of probably one of the best stories created, Dune, with the trilogy Legends of Dune, the prequel stories to the science fiction classic by Frank Herbert.

To top things, I’m not only ahead of schedule with my 52 books in 52 weeks project, but my page total for the week has been achieved, right now sits at 1,266 of the 1,246, and with the weekend ahead off me, this can only get better.

I’ll jump right into the book, there’s a long night ahead of me.